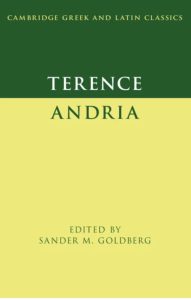 We are pleased to announce the recent publication of a new commentary on Terence’s Andria, edited with Introduction and Notes by Sander M. Goldberg, in the Cambridge Greek and Latin Classics series. As the first play of the Terentian corpus, Andria has always attracted a special level of attention. It was the first Roman comedy produced after antiquity (at Florence in 1476) and the first translated into English, and it has inspired writers from Jonson and Dryden to Thornton Wilder. It provides an excellent introduction to Terence ‘s particular style of comedy, noteworthy for its ambivalence in representing the perspectives of woman and slaves and its experiments with a secondary plot line.
https://www.cambridgebookshop.co.uk/collections/new-books/products/terence-andria